The weather has turned a bit colder, yet not quite cold enough to hurt. I recorded no frost night this week, and the plants in the glasshouse are thriving. In total since September, there have been only three frost nights here in Abbeyside. However, the forecast for the week ahead looks wintery. I’ll be rooting out my thermals and garden gloves. However, before I look ahead, here are my thoughts on the week just finished. As always recently, it started with Monday.

An update on my recent purchase and planting of Acer japonica Red Flamingo. The leaves are gone but the bark becomes the interesting focus. It turns pink in winter, and the colder the weather the more pink it turns. As you know, it has been extremely mild here in Dungarvan. So mild, in fact, that we say it is wicked mild. It’s a Dungarvan phrase. Anyway, ar aon nós, the bark has turned pink and may yet deepen in colour as the remainder of winter weather continues. I noticed also that the plastic ties have become too tight and it is time to cut them loose. Then, in the interests of stability, I will re-tie the tree a bit looser. Akin to yesterday’s article, I’ll look for something other than plastic.

Today I am on the @waterfordgreenway once again. I am walking the section near Dungarvan. Actually, I’d be reprimanded for mentioning that, because it’s actually Abbeyside. Ar aon nós agus araile again, I need help identifying this plant. It is growing profusely on a steep bank and is now in full flower. I feel that it may be classified as a weed.
On the basis that it is a weed, I’m wondering why are some plants called weeds? I once came upon a definition that a weed is a plant in the wrong place. If this plant were in my suburban garden perhaps I’d not want it and therefore calling it a weed gives me permission to murder it. Simple really. On the other hand, when my mam visits my garden she usually has two questions: Is that new? And secondly, Is that a weed? (Seriously, can you actually imagine there being a weed in my garden?) My standard reply is: If you like it, it’s a flower and if you don’t like it, it’s a weed.
As a final thought, we might not appreciate the flowers as much if there were no weeds.
So, the questions remain: What’s it called and is it friend or foe?
Update: the Internet had spoken and clarified the conundrum. The plant is an invasive weed called Petasites fragrans otherwise known in Brexit English as Winter Butterbur. Apparently, it has a vanilla scent.

What could be more useful than a gardening book as a Christmas gift? I got not one, but two. They are entirely different too. The first is The Almanac: A Seasonal Guide to 2019 by Lisa Leendertz. Intended as a “toolkit for connecting with the world around you”, it offers ways of appreciating the natural rhythms of the year. It is a book to be dipped into now and again. For example, the section relating to January includes details of the extra daylight from 1st to 31st, curious tales of Rastafarian celebration of Christmas on January 7th. Rastafarians believed Jesus was black and was born in Ethiopia. There is a beautiful section devoted to the mid-winter Snowdrop and songs relating to Burns Night, celebrated in Scotland on the 25th.
The second book is The Writer’s Garden: How gardens inspired our best-loved authors, by Jackie Bennett. It features 19 well-known authors and the influence that a specific garden had on their career. So, rather than start at the beginning, I started with a favourite author, Charles Dickens.
Receiving this book touched me because I have centred my writing around my small, humble garden. In many respects, I am my own much-loved author, as I find opportunities for gratitude in my garden and in my writing of it.

Guess what’s for dessert this evening? This haul of fresh rhubarb is really a surprise at this time of the year. Regular readers will remember me moving Marion’s rhubarb to its new home on the raised bed. It was covered with a thick mulch of gladioli leaves and topped off with a horse numna. The weather has been so mild that the conditions for growth were obviously just right, and the growth was sufficient for a decent dessert for two this morning. No, we don’t have morning dessert. The growth was just right this morning, and there’s a theory going around somewhere that says fruit and vegetables should be harvested in the early morning. Out came the sharp knife, and off I went to the custard shop for yellow custard. What shall we have for dinner before it, I wonder? 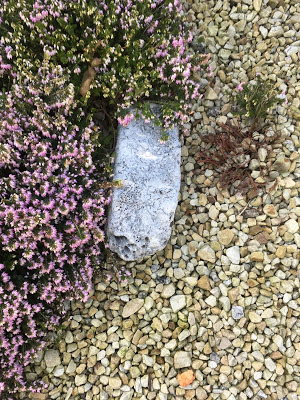 I am returning to the photograph of 6th January to add the following…
Heather’s many uses were sufficient to earn it a place in the Old Irish Brehon Laws on trees and shrubs. This meant that the unlawful clearing of a whole field of heather was subject to a fine of one “dairt”, or year-old heifer.
Heather was also linked by some medieval scholars with the ancient Irish Ogham alphabet. Each letter of the alphabet was named after a different native tree or shrub, and the letters Onn or O and Úr or U were said by some authorities to be named after Heather. (Irish Wild Plants: Myths, Legends & Folklore by N. Mac Coitir p. 144)

Just leaving this here today. I’m off cycling my first 200k of the year so there really isn’t much time for gardening or photographs or writing. The collage is a combination of each season taken using my bitmoji You don’t know about bitmojis? Every keen gardener is encouraged to create one. In this case I opted to wear the same outfit throughout the four seasons. But a close look through the following screens shows that I am wearing heavier winter wear. Met Éireann mentions that Arctic air will bring sleet showers and some snow on high ground early next week. I’ll be back from my cycling trip before it arrives. 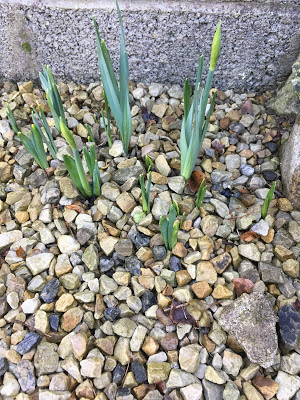 Won’t be long now! Spring is on the way. I did have daffodils earlier (in fact, they were in bloom for Christmas day). They were bought for indoor windowsill and bloomed so much earlier. Now, as with daffodils that haste away so soon, they are finished flowering just as the outdoor ones are getting ready to show colour.

That’s it for this week. Hope you enjoyed the journey.

My Saturday bike ride was a bit special, so I’m adding it here: 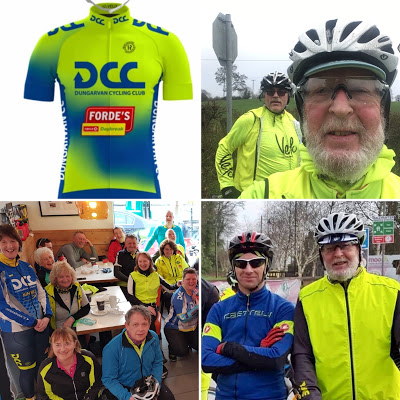 There’s another Dungarvan. It’s in Co. Kilkenny and about 90k from the real one. Today (Saturday), it was foggy in the other one. I can’t say about my Dungarvan because I left it in darkness at 7am and arrived back in darkness at 5.30. I know it’s possible that it be foggy and dark at the same time. Truth be told I really can’t say. On the weekend Dungarvan Cycling Club launched its next-generation summer gear, I ramped up my miles quite considerably. My friend Declan and I toured Waterford, Kilkenny and just a tiny corner of Tipperary on our first 200k of the year. Mild weather, calm winds, good burgers and steady pace.

I thought about taking it easy today (Sunday). In fact, I did take it easy but on the bike again. The famous group five paced me sensibly to Lismore for sausage rolls, and the lovely Group 4 got me home at a brisk pace. Altogether, a great weekend ar an rothar.

Pádraig (also known as Pat) is the author of GrowWriteRepeat garden articles. He loves winter rhubarb (same as last week), Irish myths & legends and emojis. He also likes early daffodils and Rastafarian history, but not weeds that are not flowers.