It was a cold week but not as cold as was predicted. In the garden, I finally got around to putting a fleece layer in place, and I finished pruning the roses and fuchsias. The Blood Red Moon failed to work its magic but the geraniums rooted perfectly! Here’s what caught my eye last week…

It’s Blue Monday and there’s a Blood Red Moon, otherwise known as a Wolf Moon. There’s a thing called Gardening by the Moon. According to this, certain plants do better when planted during the waxing moon, and others while the moon is waning. Apparently, also there is some scientific evidence to support this.
Whether or not there are benefits to gardening at lunar eclipse times is unclear. Early this morning there was a total lunar eclipse, and I rose from my bed to view it, but all I could see was cloud. I wanted to wait to see if the cloud would clear, and spent a while finding out about moon gardening. I did get a hazy glimpse of the eclipse as the moon came out of the earth’s shadow after 6am. The next total lunar eclipse will be 2029.
I know the Blood Red image is not mine. As far as I remember I screenshotted it from a live-stream online, but as far as I’m concerned it’s my moon. Credit for the image goes to an unknown source.

The miniature daffodils are in full bloom, and they brighten up a cold January day. This variety is called narcissus topolino.

Fair daffodils, we weep to see
You haste away so soon;
As yet the early-rising sun
Has not attained his noon.
Stay, stay,
Until the hasting day
Has run
But to the evensong;
And, having prayed together, we
Will go with you along.
We have short time to stay as you,
We have as short a spring;
As quick a growth to meet decay,
As you or anything.
We die
As your hours do, and dry away
Like to the summer’s rain;
Or as the pearls of morning’s dew,
Ne’er to be found again.
~ Robert Herrick

Life is short, and death comes to all. Death came suddenly last Sunday night to a wonderful local man, Michael Wright. Known far and wide as the Mad Hatter, he was a wonderfully gifted entertainer. In recent times too, he had developed very thought-provoking insights into the people and community via his very humorous Facebook stories. He was always interested in people and he spoke only positively about everyone. I had a grand chat with him just before Christmas but little did I know it would be my last. As with many influencers, he taught me much. 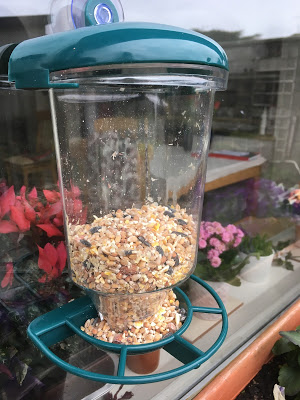 This is my latest addition to the array of bird-feeding bobs in the garden. It attaches to the window via suction but does not seem to be too secure. I imagine that it will withstand smaller birds but when the eagles and buzzards alight it will go tumbling down. Interestingly, I watched a recording of a good garden advice programme only last night, mentioning that it might be a better idea to grow more plants with berries that birds like. Less birdseed was being encouraged. With this in mind, I shall commence a Survey Monkey poll asking the little birdies which berries they’like best. I think it only fair to keep them well fed until the results are back. After all, it IS much colder this week.

Once again I am outside the comfort zone of my suburban garden and viewing the bigger picture of West Waterford. The river is the Blackwater. The history of this river is very interesting. It is black for two reasons. Firstly, it flows through the peat bogs of Slieve Lougher, and secondly on account of the Duhallow coal district through which it flows. As Gaeilge, it was never called the Blackwater, rather An Abhainn Mór (bastardised to Avonmore) meaning the Great River. At one time it was known as Broadwater, which would seem to be a more acceptable translation from the Irish. I cycled in very mucky road conditions today and proceeded to take a selfie at a special viewing point of the Blackwater looking down on Villierstown. It looks down also on many of the English gentry estates still occupied to this day. Finally, the rainbow completes the picture. We found no gold but in fact, the real gold is in being able to see and appreciate these spectacular areas. Later, we had biscuits with our coffee in Ardmore. That counts for a lot!

There is very little by way of plant colour this month. It’s not that things are not happening. Things are indeed happening, and new life is on the way. The longer evenings and longer daylight hours are beginning to have an effect. The tipping point is approaching.
This week I am noticing things other than plants. Today, it’s a miniature ornamental thatched cottage that was given to me by my brother Ber. I nestled it among some plants and it looks as if it’s been there forever.

As I photographed it from front, side, back and above, a poem I learned in school came to mind. It’s called “Ar Chúl an Tí” (Back of the House) by Sean Ó Riordán. It was voted among the top 100 Irish poems back in 1999. Here, I quote the first and last verses, and then the translation to English by Tony Dermody. Always a difficult task to translate poetry while keeping the form and beauty of language.
Tá Tír na nÓg ar chúl an tí,
Tír álainn trína chéile,
Lucht cheithre chos ag súil na slí,
Gan bróga orthu ná léine,
Gan Béarla acu ná Gaeilge.
…
Ba mhaith liom bheith ar chúl a’ tí
Sa doircheacht go déanach
Go bhfeicinn ann ar cuairt gealaí
An t-ollaimhín sin Aesop
Is é in phúca léannta.

At the back of the house is a land of youth,
A jumbled beautiful space among
The farmyard beasts unclothed, unshod,
Nor knowing the Irish or English tongue,
Walking the way.
Yet each one grows an ample cloak,
Where chaos is the heart of rule,
And in that land the language spoke
Was taught of old in Aesop’s school,
Long passed away.
Some hens are here, a chicken clutch,
A simple duck, though fixed of mind,
A big black dog with wicked looks
Barking loud like a good watch-hound,
A cat sun-baking;
There, a heap of bric-a-brac,
The cast-off treasure stuff of life,
A candlestick, buckles, an old straw hat,
A bugle quiet, and a kettle white
Like a goose waking.
Here the tinkers come uncouth,
Blessing generously all they see,
Feeling at home in the land of youth,
Seeking cast-off things for free,
All over Ireland.
I would go back in the dead of night,
The treasure gilded in the moonbeams’ reach,
Perhaps to see in the eerie light
The child-wise Aesop’s phantom teach
His ghostly learning.

There’s beauty in the skeleton of last summer’s Agapanthus flower. The delicate blue flowers adorned the rockery and later they remained hidden under the spreading fuchsia bush. As the autumn moved along and most of the garden was manicured, I decided to leave the remains of these 20 (or thereabouts) flowers standing erect. The seeds are long gone, having been cast off in the hope of continuing this Agapanthus species. All that is left is the dead stalk and umbrella.
I pulled them easily and proceeded to put them into the refuse bin (as I do not have a compost bin/heap), but I saved this one at the very last moment. I then placed it in my winter area of interest just outside the patio doors.
Strong gale force north-western winds are forecast tonight, but I feel that this dead relic will survive any buffeting that comes its way.
Most Agapanthus plants are quite big, but this is a miniature variety. It reaches a height of just 30-40cm. I must try to find out the variety name. Otherwise, ’tis a bit like having a dog and just calling it dog.

Plants are amazing! They reproduce in several different ways. One of these is by cuttings. Simply cut a piece of a plant, put it in soil, say the magic words and wait for a few weeks. That’s what happened with this geranium. I potted it back in the middle of November and now it’s ready for the big garden. It has a strong root system already, so I am putting it into a bigger pot. I will defer planting it outside for another while because any frost would undo all my efforts. These plants will stay in the glasshouse for another few months and I will keep a close eye on them to make sure they don’t get attacked.
Frighteningly, the day may be approaching when humans can be cloned. I wonder why it’s a good idea for plants and I am abhorred that it may happen for us humans? There are too many answers to that.
Anyone had success with these or other cuttings? Isn’t it a great way to clone the plants we like? “A small bird sat on an ivy bunch
And the song he sang was the jug of punch.” (Clancy Brothers & Tommy Makem)

Páraig (also known as Pat) is the author of Petals by Paraig garden articles. He loves an occasional clear sky for lunar eclipses, the poetry of Sean O Riordán and special viewing points along the river Blackwater . He also likes the music of The Clancy Brothers and Tommy Makem, but not separately.

One thought on “Mad Hatter And The Lunar Eclipse”