There are only four days this week. You may be shocked to read that in plain text. I have decided, to realign my blog with current international calendars. Thus, I am moving towards starting each week on Monday. Therefore, so and because…. this article is shorter, recalling only Thursday to Sunday. 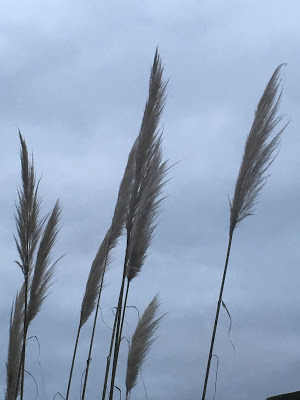 My front garden is called by many names: the forgotten garden, the neglected, the shaded or the dull. I have a solid bias against it simply because I do not live there. Quite simply, it’s a place I pass by when coming and going. Today is the turn of the front garden to be in the limelight and the plant is Cortaderia, commonly known as Pampas Grass. I do not know the variety. I do know that it looks good in winter. The photo is not of the entire plant, merely the seed-heads. Each one is sturdy and can survive strong winds. Surely there must be thousands of seeds being readied for scattering. I have never seen even one seed produce a next-generation plant. Must investigate further. I am struck by the thought that plants produce enough seed to continue the species. If there’s not enough its goodbye plant. Equally, producing too much seed is very wasteful. Seeds compete for nutrients while attached to the parent, so a weakened quality is the result of oversupply. Weakened quality is a recipe for extinction. Also, if there’s an oversupply it is more likely that seeds will have to compete against one another where they germinate. This is what strengthens a species… the survival of the strongest. But in a situation where many seeds are strong and healthy, it does not make sense that they grow very closely together. I think the Cortaderia produces so many seeds simply because germination is not straightforward. Perhaps I’ve got it all wrong.
Continuing #shortdayschallenge as I log my winter garden here in Dungarvan, Ireland. Time to focus on the little things, such as thousands of tiny seeds on a very large plant.

I enjoyed looking back to something I wrote in February 2017. I am reminded that I am about six weeks ahead of schedule this year. The seed sowing will be started next week.
“The last time I turned on the old propagator was way back in nineteen ninety something. Donald J Trump, now the Oval Office occupant, was an important businessman. Now, as I return to a former active love of growing from seed, this madcap president is surrounded by staff looking to turn him off.
I’m under starter’s orders. The time for looking at the garden from within is over. Winter has been very kind to us here in Dungarvan. There have been only a few frost nights and rainfall has been well below average. I’ve spent many weeks flicking through catalogues and gardening in my head. And now is the time to get things moving again. I had cleaned my worn-out propagator in early January only to find that it’s not a propagator any longer as it refuses to heat up. Nothing for it but to bite the bullet and seek a replacement.
I put out the word and waited for some feedback. I had been googling, but everything I looked at seemed fantastic. The internet has a way of making everything look like the bees’ knees. Within a short while, thanks to David in Friendly Gardeners I followed up on a recommendation to purchase a Vitopod from Greenhouse Sensations. Incredibly, it was delivered to me within 36 hours, and assembled/installed immediately.
The seed packets are ready, all 57 of them. Yes, I’m aware I’ve got a small garden and I will not be able to plant most of what germinates. I will proceed undeterred, however. Likely I will just give any surplus plants to friends locally. Most of my seeds are annuals and vegetables.
Being a slightly organised person, (Ahem, note added January 2019 for Michele) I’ve figured out a planting order. I know I’m a few weeks behind schedule, and the new propagator will be loaded to the brim for the next six weeks.
I began with a real favourite, pompom dahlia. I had dozens of these many years ago and now it’s time to grow them again. I’ll be creating a small section for these lovely colourful plants along with several others that will flower in late summer until the first frost. So let the journey begin.”

Molly on duty. Actually, despite having had breakfast, she searches for birdseed scattered earlier. Start the day slowly. Be like Molly.
Sunday, January 6th.

Today is Nollaig na mBan, otherwise known as Women’s’ Christmas. It is not connected in any way with the photos here. It’s easy to see that there is no connection. The stones removed from the back at Ballinclamper have been placed here and there on the gravel. They have been moved several times because in my view there’s nothing worse than the wrong stone in the wrong place. At the moment, I remain quite pleased with the one on the left. In some mysterious way, it may seem that the heather actually grew around it, except for the fact that readers know the stone is only a week old.
The photo top right excites me for a different reason. There are 10 circular holes in the lighter stone, likely homes to some sea creature families. Now that I realise that may have been the case, I figure I will half bury this stone in a shady spot. I will position it so that the holes will not flood with rainwater, and perhaps some garden insects will move in.
Finally, the photo on the bottom right is a stone version of a rag doll. It actually is. I’m sorry if you cannot see it.
So, to finish foff for this “week”…

Páraig (also known as Pat) is the author of Petals by Paraig garden articles. He admits to being slightly organised, yet it’s a severe waste if DNA because his usual habit is to walk into someone’s house with X things and walk out with X minus 1. There’s a link on his blog to a good article about personal forgetfulness, but naturally… Yeah, you guessed!