Christmas was very good. Turkey was moist on the 25th, but by 28th it lacked a certain flavour. Mrs. Brown and her Boys lit up the evening’s TV as they grappled with Maggie, but all along the garden remained interesting. Here’s how I logged the week:

Thursday, December 27th: Top left, clockwise…it’s now time to update the DCC logo to our new club sponsor. Also, time to visit a local beach to get some smooth stones. I think it may be illegal, but I’ll live on the edge in the knowledge that some stones that may have come from far-flung shores will add to the garden during 2019. The peanut feeder has been a haven of refuge for hungry birds. It is a busy spot between 8-10am and is also the scene of rude intolerance by some dominant creatures. Fights are a common occurrence. Euonymous White Fire is standing erect and adds good variegated foliage. Continuing #shortdayschallenge as I briefly log winter here in Waterford, Ireland. Time to focus on the little things, particularly peanuts. 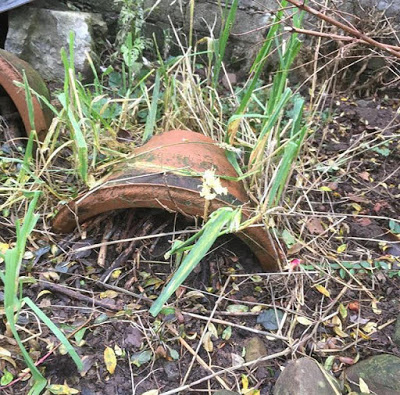 Friday, December 28th: I stumbled upon this forgotten nook. Last winter I used a broken pot to give some shelter to the creatures. I filled it with twigs and leftover leaves and it has weathered well. I do hope there are many little creatures wintering cozily. Later I placed a bird feeder above it and look what has happened. Some seed has fallen and rooted. In fact, it is thriving! I am going to leave things as they are in the hope that these grasses or whatever will set seed during the coming summer.

Saturday, December 29th: In 2015 we completed a mini garden makeover. One of the areas we wanted to re-style was a small patch underneath the clothesline. It is approximately 3 metres square. We got really good advice from Michael McKenna in Blackwater Garden Centre. He suggested planting a simple arrangement of Helleborus (Christmas rose) and ferns. The idea was that the area would be a particular focus of interest just for a short time of the year. It is a very sheltered spot, bounded by a wall on two sides and glasshouse on a third. The combination of three ferns and three Helleborus is stunning. The Helleborus will look great for January and February and the ferns will look great next summer. Right now we have the luxury of both! The following year we added several clumps of bluebells which are just peeping above ground. They will be in bloom in April/May. All in all, the arrangement is very simple and uncluttered. Sadly, Michael passed away last year and Blackwater Garden Centre has closed down, yet his memory remains with us in our garden. 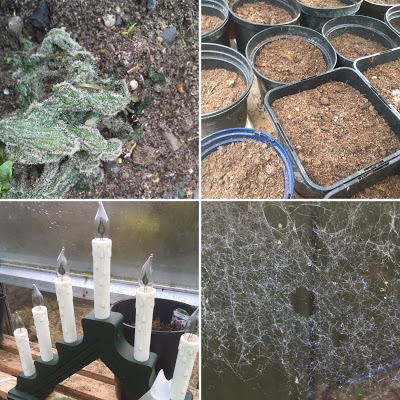 Sunday, December 30th: I am usually on my bike on Sunday mornings. I lasted a mere 10 minutes today because of a pulled muscle while bringing a breakfast plate to the dishwasher a few minutes before departure. Later, I hobbled around the garden to get the customary four photos rather than the sensible RICE therapy. Clockwise from top left: 1. I put a basil plant in the glasshouse a few weeks ago but now it is a mouldy mess. Is this an annual? I must ask Alexa. It doesn’t look like it’ll survive. 2. The begonias are dormant and cozy, all 42 of them. I find it amazing that what now looks dead will bring forth such magnificent foliage and flower colour next July. 3. Plenty spider webs adorning the glasshouse. I’ll be tempted to evict them but not today. 4. Every glasshouse should have a Christmas candelabra, seeing as it is in some ways an extension of the house. This and some other lights are on a timer to light up the far end of the garden between 5-10pm. It looks good from the kitchen window. Continuing #shortdayschallenge as I briefly log winter here in Waterford, Ireland. Time to focus on the little things, such as spiders.

Tuesday, January 1st, 2019: Happy New Year from Abbeyside. Today’s photo is from last March when the Beast from the East arrived and stayed. Projections seem to suggest we are in for a severe weather change at some point this month. If it happens, some plants are in for a shock. I’ve seen new growth much earlier than usual. This new growth will surely be subjected to severe hardship. Also, here’s a message for Instagram and Facebook higher management: Ye are making a right dog’s dinner of things. Of course, ye already know that. In my case, it’s not really too much of an issue because I don’t care that ye put processes in place to reduce the number of people who see my writing/photos, in favour of putting paid advertising under my nose. Continuing #shortdayschallenge as I briefly log winter here in Waterford, Ireland. Time to focus on the little things, such as personal principles and integrity.

Wednesday, January 2nd: I had a really busy day and nearly didn’t get time to write. I missed out on getting photos, so I was glad to have a few from yesterday to use. It has been on my list since early December to get seaweed but it stayed on my list and didn’t get done. Finally, I got to Ballinclamper on New Year’s Day with a few buckets. Both were quickly filled to the brim with the magic stuff. Also, some stones and driftwood. I did search carefully to see if there was any discarded metal detector but I gave up. Just couldn’t find one! Within less than an hour, back home, all the seaweed was carefully deposited on parts of vegetable bed Numero Uno. More beach visits planned. I think four will be enough. I am reminded of several Irish novels in which harvesting seaweed is mentioned. It was such an important part of farming life until about 1960. I searched http://www.teanglann.ie and it shows up to 100 various Irish words for seaweed. The one that caught my eye was “bia trá”, literally beach food.

Happy New Year. Thanks for being here.

Please leave a comment or two below. Get it off your chest. I’m taking bets on Alexa.

Páraig (also known as Pat) is the author of Petals by Paraig. He loves cycling, Christmas Rose and even Alexa, at times. He also likes stones and driftwood from far-flung shores. He does not like the Beast from the East, nor Facebook/Instagram management policies. A line has been crossed.